Previous: Blog November 2003 Next: Blog January 2004 31st December 2003 Dan O'Sullivan has done some interesting hi-tech arts projects, such as Slow Glass and Ambigraph - http://stage.itp.tsoa.nyu.edu/~dano/proj/ Remo Campopiano has done some very interesting work using video and red fire ants! - http://remo.net/bannister/development/documentation.htm 28th December 2003 Read about "Mystery Hill" in New England, a site which appears to bear resemblances to european megalithic sites - http://www.crystalinks.com/mysteryhill.html I had no idea that such things existed in North America, though it's not clear to me that there's been a thorough investigation of origins of the site. 21st December 2003 Saw work by Rirkrit Tiravanija at The Ikon Gallery. It consisted of groups with particular hobbies or interests, including a chess club, model railway society and The Birmingham Pen Trade Heritage Association ( http://www.penroom.co.uk/ ). Upstairs is a recreation of Bar El Batey, the artists favourite bar. All interesting and quite restful! The exhibition is covered live and with recorded highlights on Super Channel( http://www.superchannel.org/Home/Profile/Channels/BKK/BIRMINGHAM/ ). 19th December 2003 Made great use of BBC Radio 4's "Listen Again" service - http://www.bbc.co.uk/radio4/progs/listenagain.shtml I heard a couple of shows examining UK UFO stories, well put together as they moved from "it must be a UFO" to more down to earth explaination - http://www.bbc.co.uk/radio4/hitchhikers/convergence.shtml One show I'd heard before, quite a while ago, was a program about the future of computing/technology/everything by Douglas Adams - http://www.bbc.co.uk/radio4/hitchhikers/convergence.shtml Very nice to find it online. The origins of life on earth form the subject of "An Earth Made For Life" - http://www.bbc.co.uk/radio4/science/madeforlife.shtml - I haven't heard this one yet though! Also found some nice applets illustrating learning, evolutionary art etc - http://www.arch.usyd.edu.au/~rob/ 18th December 2003 Saw work by Gail Troth at St Paul's Gallery. Saw Modified Toy Orchestra at The Rainbow. I'm currently reading The Moonstone by Wilkie Collins. 13th December 2003 Saw an exhibition at Cell Space. Very nice piece by Bob and Roberta Smith based on the contents of the Guardian on the day of the "Stop Bush" march in London. 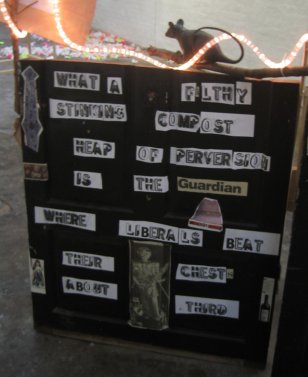 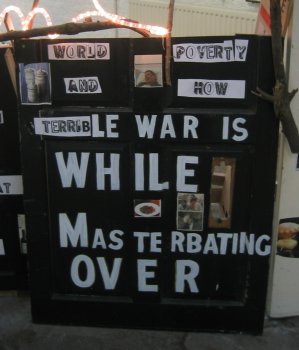 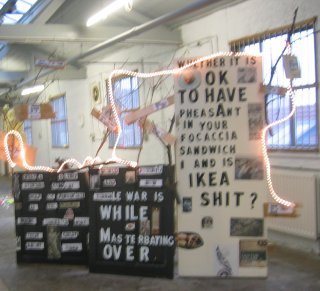 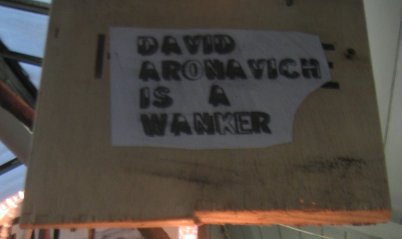 Also visited the Design Museum, which was OK but much smaller than I expected. Ate at Satsuma. 9th December 2003 Ate once again at Cafe Soya, food was excellent. I had Tofu and Fried fish in a chilli sauce. All I seem to do at the moment is eat out! 7th December 2003 Went to a Modulate event at the old X-ray factory in Smethwick (previous scene of the Radioactive exhibition. Nice lighting installations, some good music from Bobby Bird and others, with live visuals. Also Seven Inch Cinema (becoming all pervasive now) including a short film by Moseley local Sema, painted onto film. 6th December 2003 Went on a nice guided walk around the Jewelry Quarter. Very cold and windy, but interesting to get a bit of the history of the place and see some wonderful buildings. Saw Spirited Away at The Mac, a Japanesse Animation about a little girl who gets lost and ends up in a bathhouse for the spirits. The quality of the animation was fantastic, beautiful hand drawn characters and backgrounds mixed with what I assume were computer generated effects. Very good, worth seeing again. Ate at (shock horror), Little Italy. 5th December 2003 Ate at Bistro Lyonnais in Moseley. I'm currently using some great spam filtering software called POPFile. Previous: Blog November 2003 Next: Blog January 2004 See Also: Web Changes for other recent updates, All Blog Pages for previous blogs This is my blogchalk: United Kingdom, West Midlands, Birmingham, Moseley
This topic: Andypublic > MyBlog > BlogNovember2003 > BlogDecember2003
Topic revision: 31 Dec 2003, andyp