I couple of nights ago, I ended up listening to Radio 3 by accident. Somehow, my phone radio was tuned into it, and I heard some great music on Late Junction %EXT%. I thought Radio 3 was just classical music, but apparently not. One of the songs, Umbrella by Mechanical Bride (MySpace) %EXT% sounded so good I had to make a note and look them up. Give them a listen! The Late Junction website has playlists and internet radio %EXT% for the most recent shows. I think it would make good music to work to.

Train Travel Across the USA

I'd like to do more travelling by train - you get to see so much more than when you fly! The Man in Seat 61 has a great guide to USA by Rail %EXT% concentrating on the long distance services. He flags up the California Zephyr from Chicago to San Francisco as particularly scenic, as well as the routes from New York to Niagara Falls and Canada. Some of the trains have special sightseeing cars, with big windows and seats angled to give the best view. Another thing to add to my list of things I'd like to do.

Bearded magazine is having a launch party (6 months late) at the Sunflower Lounge on Friday February 15 with Laura Groves %EXT% , Ratface %EXT% and The Alfresco Banks Band %EXT%. Robots vs Dinosaurs %EXT% returns just around the corner at the Island Bar, on the same night Friday 15th Feb. There's some great music promised with live sets from Plant43 %EXT% and QXTC %EXT% (laptop and sax apparently!). Don't forget that there's a discount (down from \xA33 to \xA32

) for those who turn up dressed as a robot or a dinosaur! Go on....

New Show at the Ikon Gallery

Tonight was the opening for the new show at the Ikon Gallery. On the second floor, we have Ryan Gander's Heralded as the New Black, clear glass crystal balls with an image faintly inscribed in each. They seem to consist almost entirely of reflections of the gallery and the people in it. It should be interesting to wander through when it's less crowded and see your dark self reflected in each. Tim Maguire's large-scale photo/paintings Snow, water and flowers show multi-coloured views of ripples and what looks like snow. The canvases are several meters long, and in close up, the snow seems to consist of multiple layers of "fingerpainting" with the ridges of fingerprints showing where one coloured layer edges out beyond the others.

Opening are the best place to catch up with what's happing in the arts, and I was reminded that Best Gallery of 2007, Crowd6 are have a new show opening soon %EXT%. I also heard that they have managed to extend their lease, so hopefully they will be hosting many more exhibitions over the next year. Hurray!

I'm Sorry I Haven't a Clue

The classic Radio 4 comedy programme, I'm Sorry I Haven't a Clue visited Wolverhampton today as part of a non-broadcast tour. I've listened to the programme since I was a kid and I was excited to see and hear it live, particularly as some of the players (and the chair) are getting on a bit

Jeremy Hardy was the team member from the younger generation, playing alongside Tim Brooke-Taylor. On Samantha's left hand was Graham Garden and his team mate Barry Cryer. The audience was issued with kazoos as we entered, and we made quite a cacophony when asked to play tunes for the team to guess - the audience as a whole was totally hopeless I'm afraid! Still it was great fun

We had all the classic rounds, including a sat-nav assisted Mornington Crescent, and it was great to see Samantha in the flesh (so to speak). Totally recommended if you can get tickets for a performance, they sell out very quickly.

I'd heard about these real-ale and pie based tours of the Black Country before, but never been on one. This one formed the social for the Natural Computation Applications Forum conference at Aston University. The bus itself is an old fashioned double decker, and the top deck has been converted so that the seats all face inwards, which is much more sociable than standard bus seats. Plus, there's a bar just behind the driver! 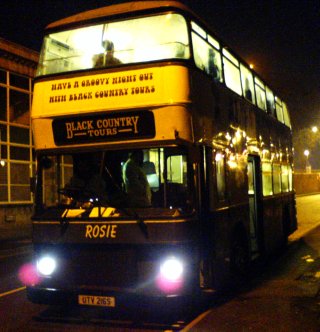 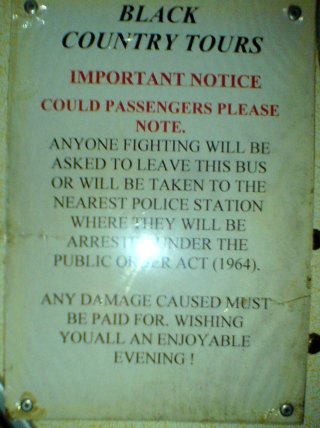 No Fighting! We were whisked off to The Olde White Rose where we had some tasty (and large) pub food, then to the Mount Pleasant and another pub whose name I forget. Each had a good list of at least six real ales, including local ones. 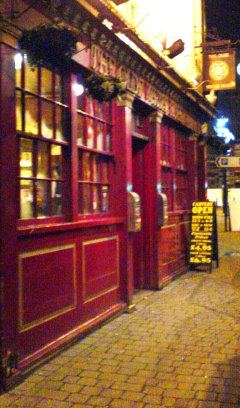 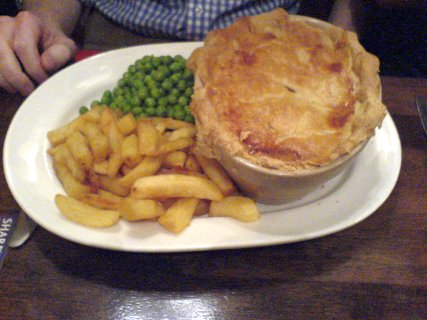 A Substantial Pie As a conference social it has the advantage of getting people to mix - continually getting on and off the bus and visiting new places means you're talking to different people all the time - something that a sit-down meal never achieves. P.S. We went with Black Country Tours %EXT%, originally booking the Desperate Dan Pie tour - but didn't eat at the pie factory, as we wanted to eat 7:30 ish as a evening meal. The Olde White Rose provided giant pies too, with 2 vegi options, one of which was a very plain looking mushroom stroganoff which actually tasted great.

Be Nice to Each Other

Someone is doing "nice" themed graffiti around Moseley. I quite like it! 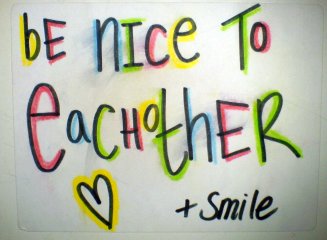 Sticker: Be Nice to Each Other and Smile

Chalk Graffiti - Its Nice to Be Nice

Chalk Graffiti - Be Nice to Each Other

Chalk Graffiti - Be Kind to Everyone

Cyclist with a Story

Nice to see the BBC News (video %EXT%, text %EXT%) covering local artist Sima Gonsai's journey around Ireland %EXT%. She cycled over 900 miles, collecting stories as she went. Prev: Blog December 2007 1 Year Ago: Blog January 2007 Next: Blog February 2008 Contact me: Website (at) Andy Pryke.com, try use a subject which will get through my Spam Filter! I've been having spam filter problems, so if you haven't had a response, I'm really sorry, please try again! See Also: Web Changes for other recent updates, All Blog Pages for previous blogs. You might also want to read other Birmingham Bloggers This is my blogchalk: United Kingdom, West Midlands, Birmingham, Moseley