This blog started in December 2001, and the website started as a Wiki in March 2001, and the first entries now hosted here are from my university pages %EXT% which started in 1994! I've just had the largest gap in updating since I started, because I've been particularly busy. I've moved house, helped plan a great wedding, been on Honeymoon, and, of course, got married

Anyway, I normally blog about public events(see Editorial Policy), rather than my personal life, so that's enough of that, back to the blog!

If you visit Moseley or King's Norton Farmer's markets, you might have noticed the Japanese food stall, run by Rie Hayashida, which sells very tasty Teriyaki Chicken Burgers, sushi (including vegi) and cakes. Rie also runs a Japanese food evening %EXT% at Leverton & Halls Deli in Bourneville, you need to book, and I got a place for today

Rie is from Nagasaki, and many of her recipes are from her mother and her great-aunt. This means you're getting home-style, Nagasaki-style food, rather than just sushi or the Anglicised "Japanese influenced" stuff you get at Wagamamas. The deli itself has a cafe in the back room, and for tonight it's been decorated in Japanese style, with paintings, wall-hangings and nice table decorations. There's a fixed menu, with the option to cater for vegetarians and pescatarians. Japanese cooking often uses stock made from kombu seaweed and either bonito flakes (dried tuna) or shiitake. Here we had a delicious rich stock made with shiitake, so there's no hidden fish for those who care about these things. 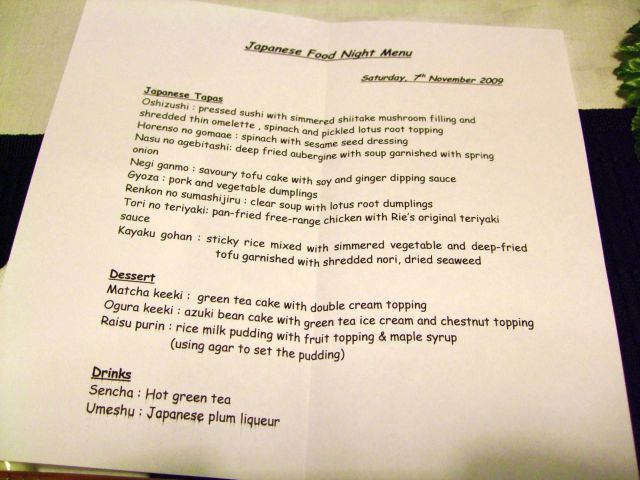 We started with Pressed Sushi with Simmered Shiitake and Beautiful Rolled Spinach with Sesame Sauce. This is one of the dishes you can get at the Farmer's Market. The colours aren't quite right on the picture, the omelette slices weren't so yellow and the spinach was a fantastic green, and so perfectly presented that at first I mistook it for a little sauce jar! I'm a big shiitake, and the umami taste goes so well with rice

These tofu balls were great - why haven't I seen them at vegetarian restaurants? The soups was lovely too, rich and tasty with soft aubergine. 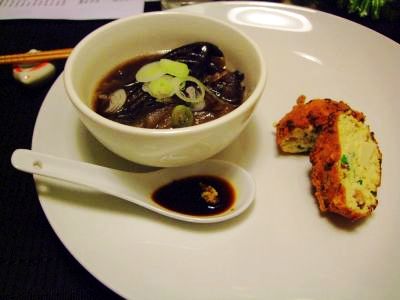 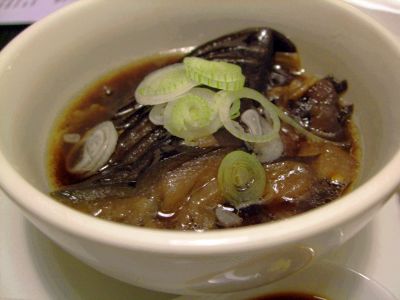 Gyoza are widely available, Japanese dumplings, normally lightly fried. Nice to see some home made ones: 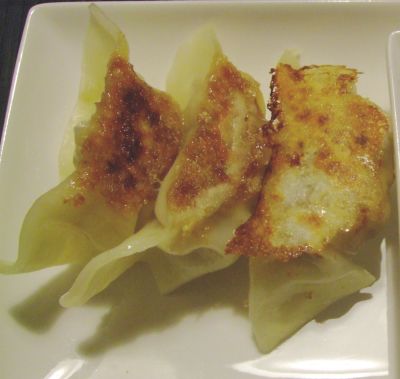 Another pretty and delicious soup, this time with lotus root dumplings, and teriyaki salmon with Rie's own sauce. I'm starting to get quite full now... 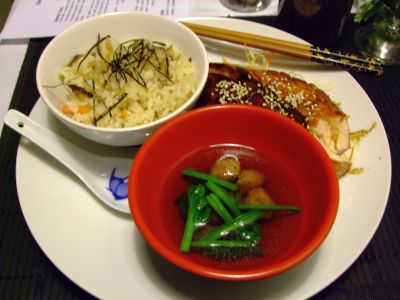 Finally, some Japanese Cakes and Deserts 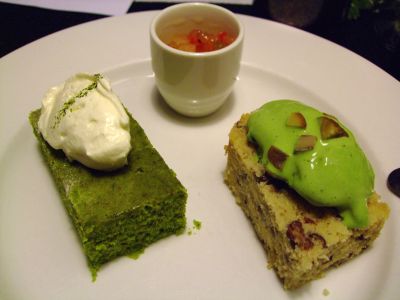 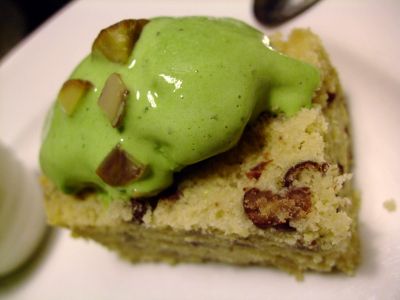 Want to eat some? See Rie's pages at: Eat Well Japan %EXT%, and if you know me, ask me along! Prev: Blog April 2009 (!) 1 Year Ago: Blog November 2008 Next: Blog December 2009 Contact me: Website (at) Andy Pryke.com, try use a subject which will get through my Spam Filter! I've been having spam filter problems, so if you haven't had a response, I'm really sorry, please try again! See Also: Web Changes for other recent updates, All Blog Pages for previous blogs. You might also want to read other Birmingham Bloggers This is my blogchalk: United Kingdom, West Midlands, Birmingham, Moseley