I've succumbed. I've joined Facebook %EXT%, and I must say I prefer it to My Space, at least for the moment. I've been thinking about social network visualisation (and doing some work in this area) for a while, and I'd thought about writing an application which visualised Facebook (or My Space) networks. I found a couple already. This one from Touchgraph %EXT% is quite nice, though it seems to run quite slow to me. It took an age load finish loading stuff when I started it the first time, but works quite nicely. Though not of course as nicely as a version I would have written

Those guys at CheatNeutal.com %EXT% are at it again in this funny YouTube video %EXT% documenting some of their media appearances and attempts to persude the public to pay other people to offset their infidelity.

First time for Seven Inch Cinema at the Hare and Hounds in King's Heath. I missed the first half of the programme which was short films, but arrived in time to see Juneau Project performing on their home made instruments and a strange French guy eating a microphone to a backing of loops and feedback! I also got to see Powers of Ten which is one of my favourite films.

The Moseley Rd Baths %EXT% fundraiser down at the Medicine Bar today featured two of my favourite bands, Misty's Big Adventure and Kate Goes.... If that can't save the baths, I don't know what will. There is a dire need for baths amongst some of the Moseley community, although some would benefit from a simple shower instead.

Went to Cafe Soya with a group of friends. Had my old favourite - Deep Fried Fish and Tofu in Sweet Chilli Sauce mmmmmh, nice.

Sign the petition %EXT% to save Birmingham Artists %EXT%. Apparently their funding has been cancelled at short notice.

Kindle Theatre - In My Father's House

Kindle Theatre %EXT% are a Birmingham based theatre group, so the MAC is home turf for them. Rather bizarrely, the audience included a large group of maths summer school students, but they seemed to enjoy the performance. Like the previous work I've seen by Kindle, at "Party Like There's No Tomorrow" and the launch event for the Festival of Xtreme Building, In My Father's House involves some audience participation, though not so much as to put off anyone of a nervous disposition

Upon entry, we were greeted and seated by the performers, asked to sign a guestbook and given both a plum and a plastic knife! Our slightly highly strung characters showed us how to make a plum cake, informed us of the meaning of life and revealed some veiled but quite traumatic events in their own lives. Along with this there was group hymn singing, and a performance of the Hockey Cokey. It's hard to describe the performance as a whole, this isn't a simple narrative work, but it's highly engaging and had the audience on the edge of their seats. I believe it's going to the Edinburgh Festival, so you've a chance to catch it there.

Odd but strangely catchy tribute to Kraftwerk's version of the Hockey Cockey %EXT%.

Amazingly enough I hadn't eaten at the local Moroccan restaurant, La Fibule until today. The place was very busy, especially for a Tuesday night, with virtually all of the tables occupied. Surely this is a sign they're doing something right. Our waiting staff were polite and friendly without being overbearing. There's no drinks license, but Drinksville a couple of doors down supplied some nice organic wine. The food was interesting, well presented and tasty but not over spiced, and we did ask for some harissa to add a bit of heat. 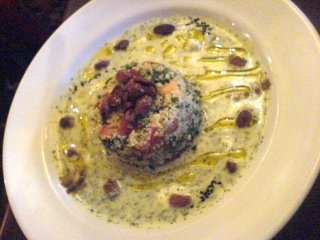 Anthony Gormley at the Hayward Gallery

Anthony Gormley's work at the Hayward Gallery has been well publicised, including a specially written Radio 4 play. The most interesting piece for me was a large glass box full of fog, so large that you can get 20 people in it and still get lost. From the outside, you see many people following the glass walls, just their outlines and their hands touching the glass visible. I had to queue for about 10 minutes to get in, and when I did I headed out for the centre of the space. Visibility is around an arms length, and the overall effect is very disorientating. All you can see is an even white light. Staring at this is very strange, looking round and seeing no change, turning my head and the world doesn't move. Soon the capillaries in my eye are visible to me, overlaid on the grey. 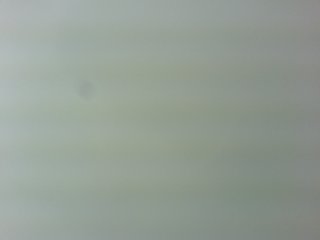 View from inside the fog box 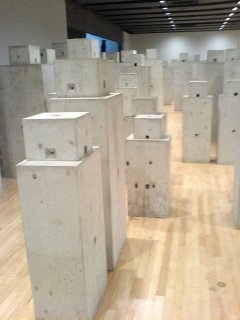 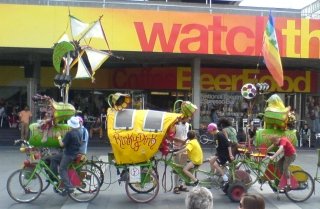 Rinky Dink on the South Bank

Behind the Hayward Gallery there are a number of sheds, each of which has been modified by an artist. One contained a digital coconut shy, another a book swap at which I picked up a copy of The Rotters Club which is set in south Birmingham. A third contained the secret world shown below, but my favourite contained cubicals each with a chair, headphones and a little window overlooking the pavement cafe. The audio told a looped story of the people sitting there. 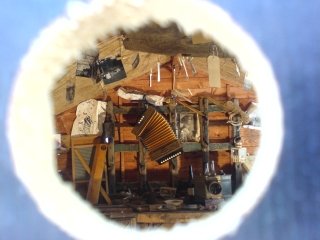 View into a shed

Photographers at the start of the Tour de France 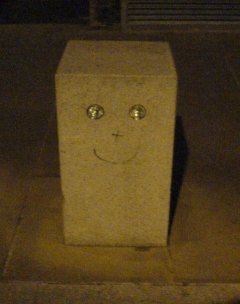 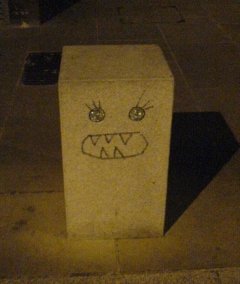 The Lives of Others

Saw The Lives of Others at The MAC. Haven't been to the cinema there for a while - they've refurbished, but unfortunately got caught in the flooding so there's a very slight (but not unpleasant) musty smell to the place. The Lives of Others deals with life in East Berlin prior to the wall coming down, in particular the interaction between the Staasi (secret service) and those they spy on. How accurate is was I don't know, but it does give an intriguing insight into how these things work(ed). Prev: Blog June 2007 1 Year Ago: Blog July 2006 Next: Blog August 2007 Contact me: Website (at) Andy Pryke.com, try use a subject which will get through my Spam Filter! I've been having spam filter problems, so if you haven't had a response, I'm really sorry, please try again! See Also: Web Changes for other recent updates, All Blog Pages for previous blogs. You might also want to read other Birmingham Bloggers This is my blogchalk: United Kingdom, West Midlands, Birmingham, Moseley